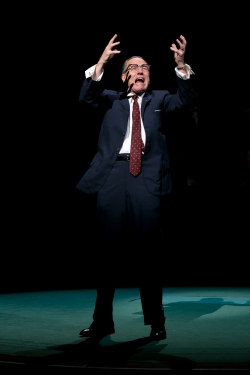 The play is now published by Grove Press and available on Amazon and at the Drama Book Shop, and is published in an acting version by Dramatists Play Service, Inc.

In 1964, the year that LBJ is looking toward an election, he has also dedicated himself to the passage of the Civil Rights legislation that has languished in Congress, stirring the hopes, passions and fears of a country headed toward monumental change.

ALL THE WAY had its World Premier at the Angus Bowmer Theater at the Oregon Shakespeare Festival on July 28, 2012, directed by Bill Rauch, with scenic design by Christopher Acebo, costume design by Deborah M. Dryden, lighting design by Mark McCullough, projections design by Shawn Sagady, original music and sound design by Paul James Prendergast, and fight direction by U. Jonathan Toppo. The dramaturg was Tom Bryant, and voice and text director was Rebecca Clark Carey. The stage manager was D. Christian Bolender, and assistant stage manager was Mandy Younger. The cast was as follows:

ALL THE WAY was subsequently performed at American Repertory Theater at Harvard University (Diane Paulus, Artistic Director; Diane Borger, Producer) at the Loeb Drama Center in Cambridge, Massachusetts, opening on September 13, 2013. It was directed by Bill Rauch; the set design was by Christopher Acebo; the costume design was by Deborah M. Dryden; the lighting design was by Jane Cox; the original music and sound design were by Paul James Prednergast; the projection design was by Shawn Sagady; the dramaturg was Tom Bryant; the production stage manager was Matthew Farrell. The cast was as follows.

A variable unit set, something between a cockpit and congress. The ability to project images on the US wall (or screen) of the Set.

ALL THE WAY was commissioned by the Oregon Shakespeare Festival as part of their American Revolutions Project.

ALL THE WAY was developed in part with the assistance of the Orchard Project, a program of The Exchange (www.exchangenyc.org)

All the Way sample.pdf