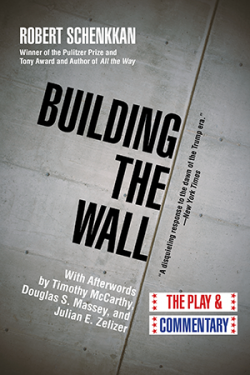 BUILDING THE WALL lays out in a harrowing drama the consequences of President Trump’s anti-immigration campaign rhetoric turned in federal policy. Two years from now, that policy has resulted in the mass round-up of millions of illegal aliens, with their incarceration overflowing into private prisons and camps reminiscent of another century. The former warden for one facility, Rick, is awaiting sentencing for what happened under his watch. In a riveting interview with Gloria, a historian who has come seeking the truth, he gradually reveals how the unthinkable became the inevitable.

Building the Wall is published by Dramatist Play Service, SkyHorse Publishing and Oberon Books— available now at Amazon, Barnes and Noble online, and theater book stores near you!

Writer’s Note on Building the Wall:

“The only thing necessary for the triumph of evil is that good men do nothing.”

What does a writer, who has often turned to history to illuminate present political crisis, do when he finds himself living through a turning point in history? We are experiencing an extraordinary moment in the life of our Republic, an unprecedented crisis which is not a partisan issue but an American version of authoritarianism which is waging an all-out attack on fundamental American values. While I would like to be hopeful, the outcome is far from certain.

Several years ago I stumbled across, “Into That Darkness” by Gitta Sereny. It is an attempt to understand the bleakest of the Nazi horrors by focusing on one ordinary man who for a brief moment, found himself with unlimited power. As someone whose family suffered grievous losses in the Holocaust, Ms. Sereny’s account stayed with me, as did the lesson derived from it: if you do not pay attention, the unimaginable can become inevitable.

Then, in October of last year, as the most expensive and dispiriting Presidential campaign in recent memory came to a close, I sat down and in a white hot fury, wrote this play. In it, I have imagined a not so distant future in which now President Trump’s racist campaign rhetoric on emigration and border security has found its full expression. While our current political crisis is extraordinary it is not new, the authoritarian play book is well established. Create a constant state of crisis which only a “strong” leader can solve. Encourage fear, divide the populace, and scapegoat minorities with appeals to nationalism, racism, and isolationism. Smear your opponents as unpatriotic and tell the press to “just shut up and listen.” The question, of course, is not so much what the Authorities will do but how we, the citizens, will respond. Sickened by the hate, by the constant assault, will we succumb to our fears, avert our gaze, and look after our own interests? Or will we enthusiastically put our shoulders to their dark wheel? Or will we resist. To those who say that could never happen here in this country, I reply, maybe so, but that of course will depend entirely on what you do.

Over 50 Products in One Year!